Half-term Hilarity with our Panto at the Point!

The annual ‘Panto in a Day’ is something of a DBA tradition, and an event to which the committee always look forward. This year we once again had the opportunity to work with our friends from the Talegate Theatre Company on a new and exciting production of ‘Jack and the Beanstalk’.

Almost 30 young people from 12 local schools and the home-educated community arrived at The Point Arts centre on a sunny February Friday all ready to flex their dramatic muscles. Right from the outset the atmosphere was great and it was clear we were in for a fun day. Any initial apprehension was soon gone as James and his Talegate team had our young performers running, skipping and jumping around the room in a series of ice-breaking warm-up exercises. These quickly progressed to joint activities where the kids introduced themselves to one another as they paired up to take part in medieval sword-fights (with imaginary swords!), and then moved on to miming the techniques of one-legged juggling! By this time all inhibitions had vanished, new friendships were being made and they were ready to learn their parts in our production.

The big opening number of the show, in which everyone would take part was a fabulous dance routine to ‘I’ve Got Bills’. Award-winning choreographer Laura Bulless took the lead in this and the room was soon resounding to shouts of ‘heel, toe, right, left, clap, skip’. In less than an hour the steps had been learnt and the routine was coming together. By this stage I was exhausted just watching, but there was no let-up in the effort or energy as the kids went straight from this to learning their first scene. They split up into three groups, led by James, Laura and the third Talegate member, Simon. Each group were to learn two scenes, and when all six were later performed in order they made up the show.

At around 12 we had a break for everyone to catch their breath and have some lunch. We were very fortunate this year to have a wonderful donation of snacks and drinks provided free of charge by ASDA in Doncaster, via their Community Colleague, Carolyn Halls. The refreshments were very welcome as a huge amount of energy was being expended! The children went straight from lunch into a (very!) quick re-cap then straight into learning their second scenes. As always, I was totally amazed and full of admiration for the enthusiasm and speed they showed as they went from learning the lines to a full rehearsal as the clock ticked down to when the parents would return to watch. A highlight for me was when Jack’s mum threw the bag of magic beans into a bin, whereupon a huge inflatable beanstalk burst out, much to the amazement of the kids rehearsing the scene!!

As the parents started to arrive outside the studio, the last practice was over and it was time to allow the audience to take their seats. We were delighted by the support shown by the kids’ families as we had nearly fifty expectant audience members there eager to watch the show. They were certainly not disappointed - once again the Pantomime was an absolute triumph, with the Point echoing to shouts of ‘Oh no there isn’t’, and ‘it’s behind you’ along with the requisite boos, cheers and laughter.

The day absolutely flew by, and judging from the comments of the young actors and their families, a great time was had by all. On behalf of the DBA Committee, I’d like to thank the staff at The Point for their support, the always fabulous Talegate Theatre, ASDA and last but most certainly not least, all the children who took part. You all helped to make it a really fantastic event. Let’s just hope we can do it all again next year! 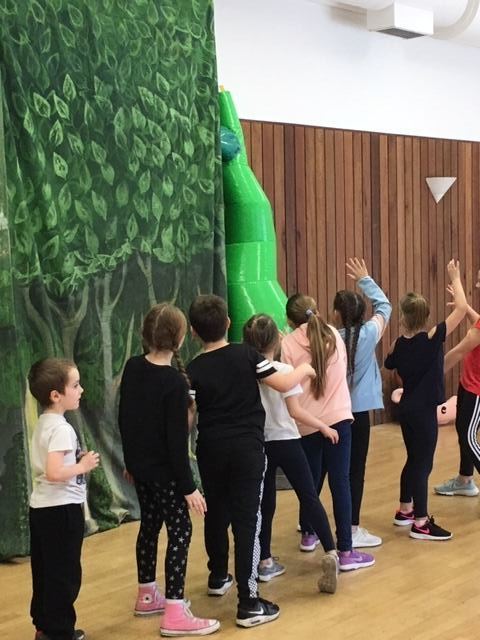 Most of the cast after a successful performance

Our youngest actor with our volunteer Georgia

The 2021 shortlist of classic reads.

Our official book suppliers are Hopkins Book Service, Westbrook House, Wreakes Lane, Dronfield, Sheffield S18 1LY. Tel.: 01246 417787. E-Mail: orders(аt)hopkinsbookservice.co.uk Hopkins offer 30% discount on DBA longlist books to all schools, and will deliver to schools in the Doncaster area. They will supply whole or part orders from the longlist.