On Thursday 11th October 2018 the DBA played host to three absolutely brilliant authors in what was definitely one of our best events ever. The Dome was filled with well over 1000 cheering, clapping and laughing children as Andy Stanton, Martin Brown and Andy Cope demonstrated once again the power of books to stir imaginations, inform and entertain and the sheer joy of reading.

After our Chair, Lesley, had welcomed everyone, James from Talegate Theatre (looking very dashing dressed as a medieval gentleman!) took to the stage as our host, and welcomed the first author, Andy Stanton. Andy’s Mr Gum books are hugely popular and his new book Natboff, a fabulous mix of history, fairy-tales, and weird and wacky humour, is on our primary list. Within seconds Andy had the entire audience roaring with laughter and as he spoke, leapt around the stage and even sang, his incredible energy filled the huge space. Amid the mayhem, he told the audience how he hadn’t done that brilliantly at school and read them a rather dull extract from his school diary about his excitement at playing with a stick! He was kicked out of Uni, and said he spent several boring years ‘as a potato’! But, as he said, just one idea can change your life and kick-start what you really want to do. One Christmas Eve, Andy decided to write a story for his little cousins. The story started with an old man having a fight with a dog, and as he wrote, other characters popped into his head and he kept on writing for hours and hours. The cousins, sadly, were not that impressed, and he forgot about the story for two years, but when he then sent it to a publisher, they loved it and it became the first of the incredibly successful Mr Gum series.

Andy went on to read a very funny extract from the start of Natboff that involved a caveman love triangle and a disco-dancing wolf! He explained how the book covers the same village and cast of characters through history from the stone age right up to the distant future, featuring stories on the dark ages, medieval knights and dragons, and Victorians, among others. As he spoke about each historical period, he got the audience to make appropriate noises to reflect that time (harder than you’d think!) and finally ended his talk playing a harmonica and singing ‘Books Are Great’! Wacky and wonderful.

Next James introduced Martin Brown, illustrator of the Horrible History books and now the author and illustrator of his own book, Lesser Spotted Animals. Straight away Martin launched into the sort of gruesome history for which the series is famous, talking about the horrors of the trenches in WW1 and in particular the joys of lice infestations! After telling us the average number of lice found on a soldier was 20, he got members of the audience to guess what the highest number might be, and then brought children up on stage to hold up big sheets of paper featuring drawings of that number of lice. By the time it got to 6,000 the papers were pretty crowded and when he said the actual number was 10,428 the grossed-out audience gave a collective ‘eeeugh’!

Martin then spoke about drawing and when he asked how many people felt they were no good at it, a surprising number of hands went up. He said it was such a shame that people often stop drawing as they think they are no good at it, yet often continue to do other things, like football or singing even when they aren’t particularly good, just because they enjoy them. Actually, as he showed with slides of cave art and hieroglyphics, drawing realistic pictures is a fairly recent artistic style, and the techniques can be learnt. However, cartoon-type drawing, the sort Martin does in the Horrible History books, is much easier and great fun too. It is often not lack of skill, just lack of confidence that holds people back. Martin went on to say that he wasn’t born with any special talent, he just loved doodling and cartoons, and simply kept on doing it and practising as he grew up. To demonstrate how easy it can be to draw and create different characters, Martin drew four circles on separate flip charts and had the children shouting out ideas for features to make some very different faces. As he said, this process is how some of our favourite cartoon characters started off, with an artist trying different ideas. It was a great fun session and one that gave the audience plenty of inspiration. Martin finished by speaking about his book, Lesser Spotted Animals, in which he combines his passions for art and the natural world, and celebrates some lesser known creatures such as the Nanbat and the Gaur, that most of us had certainly never heard of!

The morning finished in style with a joint Q and A with Martin and Andy that had James hurtling around the auditorium with a microphone and the two writers doing a kind of ‘draw-off’ where they each drew less than flattering portraits of the other! They got very little rest over lunch, as, along with Andy Cope the authors spent most of the break signing books at the side of the stage!

Our afternoon session was just as jam-packed. Phil was first up with a quick introduction to the long-lists. He also welcomed some pupils from Atlas Academy on stage to model our ‘Reading Champion’ T-shirts and promote our new monthly review competition.

Then James introduced our final author, Andy Cope. Andy is a previous winner of the DBA, and Spy Dog: Gunpowder Plot is on our primary list this year. However, it was tips from his newest non-fiction book Diary of A Brilliant Kid: Top Secret Guide to Awesomeness, from our ‘classics’ list that Andy shared in a very funny but inspirational presentation.

As well as a top author, Andy is now a Doctor of Positive Psychology, or a ‘Doctor of Happiness’. He has spent 12 years looking at the differences between the small group of happy and positive people (2%) who are able to achieve their goals and enjoy life, in contrast to the majority of people who tend to be more negative, including the dreaded ‘Mood hoovers’, who spread gloom and misery. By studying this 2%, Andy has identified certain behaviours and attitudes that lead to happiness and success and has written about these in his book. To get our brains ready for his presentation, he had the boys and girls in the audience play a loud game of ‘Say the Colour not the Word’; needless to say, the girls won easily!

The fantastic and very interactive presentation incorporated videos of Michael Jordan, Spongebob Squarepants and the Pig of Happiness, puzzles, and audience challenges. Overall it gave loads of ideas and tips to help develop happy and positive mental attitude to life that, once achieved, will last a lifetime and will spread the joy to others around you. These included; working hard to achieve your goals, don’t let yourself be grumpy or have a ‘Can’t be bothered’ attitude, perform random acts of kindness, do it better than you have to, be grateful, and find things to be positive about every day, even if it’s just that nothing bad has happened! Andy even told us the secret of the very best hugs to give to the important people in your life – they should last for 7 seconds! After his presentation Andy did a short Q and A and I have no doubt that he left his audience determined to try some of his ideas right away!

As Andy left the stage, Lesley drew the event to a close by thanking the authors, our guests, the Dome staff, our volunteer helpers and our sponsors and supporters - DFS, The Rotary Club, Waterstones Doncaster, Sine FM and ASDA and of course all the children who helped make it such a special day. It was then time for book signings and the traditional group photos on the (now pink!) giant sofa in the foyer. A packed but absolutely brilliant day and we are already planning for the next event!

1 - Chair Lesley Hurworth kicks it all off

Photos: Andy Cope shows us how to be happy

6 - Signing - the Andys getting ready

7 - DFS Sofa and some of Doncaster's finest 1

7 - DFS Sofa and some of Doncaster's finest 2

7 - DFS Sofa and some of Doncaster's finest 3

7 - DFS Sofa and some of Doncaster's finest 4

7 - DFS Sofa and some of Doncaster's finest 5

7 - DFS Sofa and some of Doncaster's finest 6

7 - DFS Sofa and some of Doncaster's finest 7

7 - DFS Sofa and some of Doncaster's finest 8

7 - DFS Sofa and some of Doncaster's finest 9

8 - James from Talegate and photographer Jon dressed for the occasion

9 - Volunteers in front of some of the audience 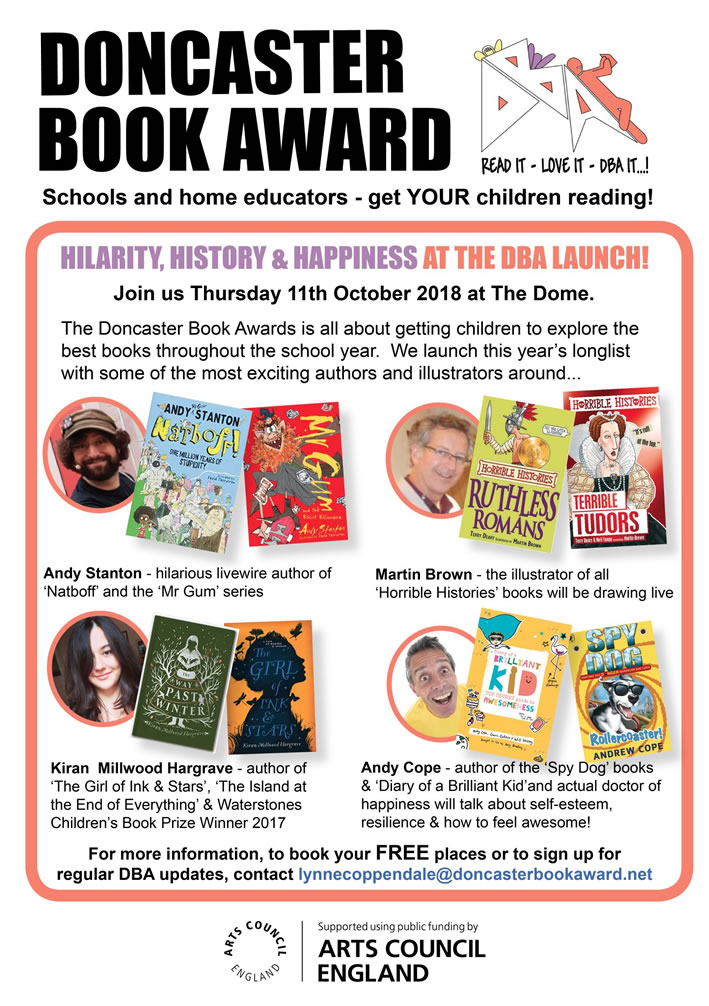 The 2021 shortlist of classic reads.

Our official book suppliers are Hopkins Book Service, Westbrook House, Wreakes Lane, Dronfield, Sheffield S18 1LY. Tel.: 01246 417787. E-Mail: orders(аt)hopkinsbookservice.co.uk Hopkins offer 30% discount on DBA longlist books to all schools, and will deliver to schools in the Doncaster area. They will supply whole or part orders from the longlist.